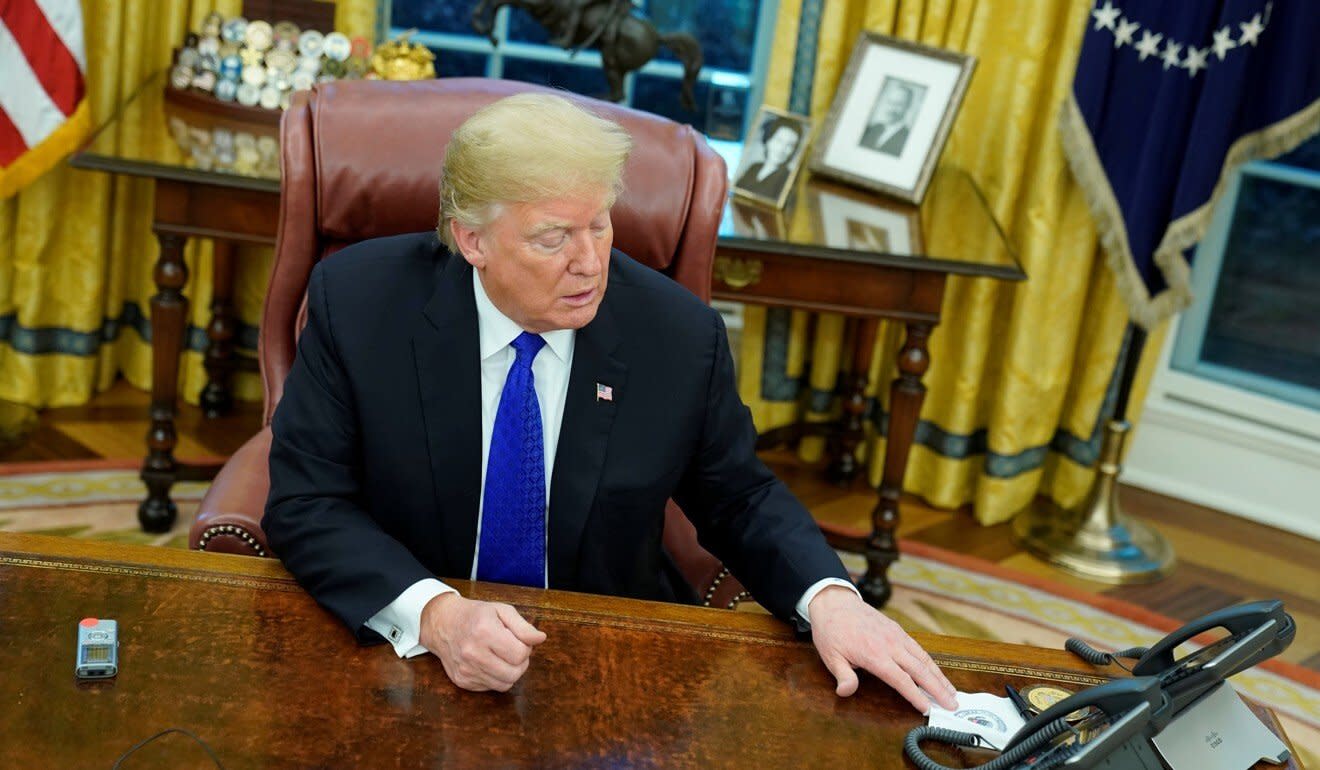 Accusations that former US President Donald Trump irreparably poisoned the fraud case against Huawei Technologies Co. executive Meng Wanzhou by threatening to intervene in her proceedings came under the spotlight at an extradition hearing in Vancouver on Wednesday.

Meng’s lawyer Richard Peck said Trump had “co-opted the extradition process in an attempt to leverage Ms. Meng and her extradition status” when he said soon after her arrest that he “would certainly intervene” in her case to aid his trade war with China. Peck called the remarks “abhorrent” and an abuse of process, that stained the Canadian justice system and the proceedings against Meng. “These words cast a pall over these proceedings … They reduce Ms. Meng from a human being to a chattel,” Peck said.

Then US President Donald Trump is seen in the Oval Office during an interview with Reuters journalists on December 11, 2018. During the interview, he said he “would certainly intervene” in Meng Wanzhou’s fraud case if it helped strike a trade deal with China.

He also cast Meng’s arrest in grand terms as part of an attempt to destroy Huawei, a firm that posed “an existential threat to [US] prominence on the world stage”. Meng’s lawyers had earlier said in a written submission: “Where the Requesting State engages in conduct that offends our Canadian sense of fair play and decency, the Court must intervene to safeguard the integrity of the judicial process. This is such a case.”

They began arguing those claims in the Supreme Court of British Columbia in Vancouver on Wednesday, in a bid to have the US request to have Meng sent for trial in New York thrown out. But Trump has loomed large over Meng’s case since she was arrested at Vancouver’s airport on December 1, 2018. Her lawyers, Huawei, and the Chinese government have long argued that she was arrested as a pawn in Trump’s trade war. However, Canadian government lawyers representing US interests in the extradition case say the argument is “moot” because Trump is no longer president and no intervention took place.

Meng is accused of defrauding HSBC by lying about Huawei’s business dealings in Iran, thus putting the bank at risk of breaching US sanctions on the Middle Eastern country. On December 11, 2018, Trump was asked by Reuters if he would intervene in Meng’s case. He reportedly responded: “If I think it’s good for what will be certainly the largest trade deal ever made – which is a very important thing – what’s good for national security, I would certainly intervene if I thought it was necessary.” In their written application to have Associate Chief Justice Heather Holmes throw out the extradition case, Meng’s lawyers said Trump’s remarks were among repeated and “unequivocal” threats to intervene in her case “in order to leverage her prosecution for political purposes”.

“These statements, offensive and ominous on their own, are made all the more intimidating due to [Trump’s] history of interference in other recent high-profile criminal prosecutions. This conduct is deeply offensive to the rule of law and the integrity of the judicial process,” they wrote. Trump had been “intent on using the Applicant, and her case, as a bargaining chip in a trade dispute unrelated to the merits of the charges against her”.

Peck said on Wednesday that the US had been campaigning to ruin Huawei as part of the trade war with China, and although Trump was no longer president, trade negotiations were ongoing. To date, the US had found no proof of a link between Huawei and the Chinese government, Peck said. Nevertheless, Meng was targeted as a result of a US campaign to seize primacy in the race towards 5G technology, a new “cold war” that China was winning, he said.

“The notion that a person’s liberty can be used … to advance a commercial transaction is anathema to our justice system [and] this process … it is a notion that strikes at the heart of human dignity,” Peck said. Peck referred to remarks by US President Joe Biden last week, after a virtual meeting with Canadian Prime Minister Justin Trudeau. Biden had said the US supported the release of Michael Spavor and Michael Kovrig, two Canadians detained by China on espionage charges a few days after Meng’s arrest.

“Human beings are not bargaining chips,” Peck quoted Biden as saying. He cast this as “in no way a repudiation” of Trump’s former remarks about Meng, but as a recognition of their seriousness. Holmes interjected. “You’re assuming that the [Biden] comment is directed to Ms. Meng’s situation, but surely one can read these words as not directed at her situation, but what they are, on their face directed to – the two detained Canadians,” the judge said. Peck responded that he was anticipating that the Canadian government’s lawyers would cite Biden’s remarks as a repudiation of Trump’s. In their written response, the Canadian government’s lawyers said: “[Statements] by a president no longer in office, about a possible intervention in this case that never occurred, purportedly to achieve a trade deal that has long since been successfully negotiated – have no past, present or prospective impact on these proceedings.”

But another of Meng’s lawyers, Isabel Schurman, rejected that suggestion on Wednesday, saying it could not be argued that the situation was moot because Trump was no longer the US president. Trump had made his remarks in his capacity as president, and nothing Biden did could change that, she said. “The damage was done the day the words were uttered … this issue can never be moot,” Schurman said. The behavior of Trump represents one aspect of the argument that Meng is the victim of an abuse of process, deserving of a stay in the extradition proceedings.

In another such argument presented on Monday, her lawyers said US prosecutors misled the court by presenting it with an incomplete record of the case, that omitted details about what HSBC knew of Huawei’s Iran dealings. Frank Addario, also acting for Meng, had told the court that HSBC bankers “fully knew” that Huawei controlled the accounts of affiliates through which it did business in Iran, undermining the US claims that she defrauded the bank by allegedly lying about the relationships. Canadian government lawyer Robert Frater said these were arguments to be made at a trial, not an extradition hearing, telling Holmes that Meng’s lawyers were trying to distract her.

Hearings in the extradition case are scheduled to continue until mid-May. But appeals could drag out the process for years. In the meantime, Meng has been living under partial house arrest in a C$13 million (US$10.3 million) Vancouver mansion, one of two homes she owns in the city. This article originally appeared in the South China Morning Post (SCMP), the most authoritative voice reporting on China and Asia for more than a century.

How Do I Write a Letter of Demand?

Thu Mar 4 , 2021
You made up your mind to file a small claim. You’ve heard it is relatively easy but unsure how to do it and where to start. If you have a legal adviser, he will advise you to write a letter of demand. A demand letter will help you get your […] 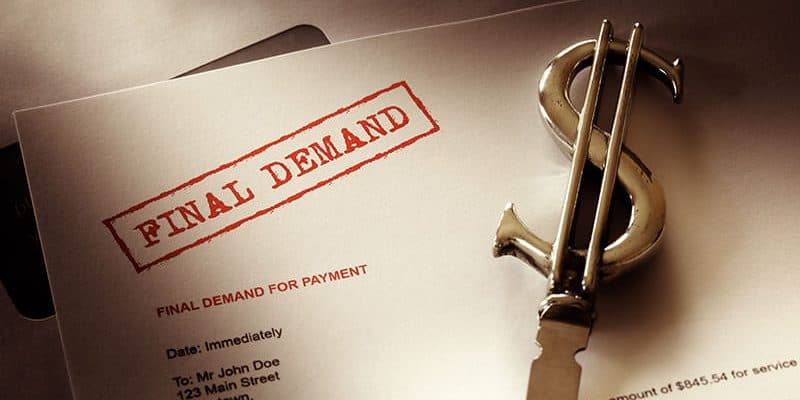