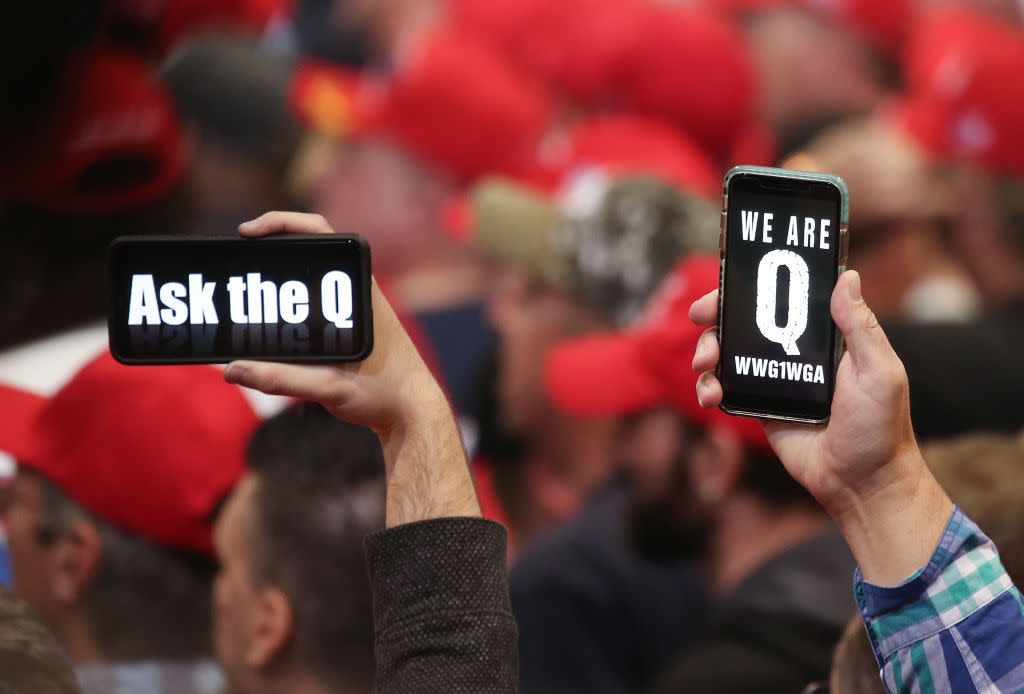 This has been mocked as a faux naïve response, but it has the ring of truth — the president doesn’t know about a lot of things, and it seems safe to say that a relatively obscure conspiracy theory is among them. With QAnon growing in size and visibility, however, it’s worth asking what the movement is really about.

To be clear, I am a QAnon outsider and a non-believer in conspiracy theories. Nonetheless, I think it’s necessary to do more than regard QAnon with either incredulity or scorn. America needs to understand it, and part of that is acknowledging that conspiracy theorizing has exerted a significant influence on American history.

The American Revolution was in part based on a (mostly untrue) conspiracy theory about the desire of the British Empire to take away American liberties, and much of 19th-century politics was based on tales of cabals and intrigue. It’s a useful exercise to approach QAnon with the same dispassionate spirit used to analyze those historical eras.

One place to start is to ask whether any part of QAnon is true. According to Wikipedia, the movement is “a far-right conspiracy theory alleging that a cabal of Satan-worshiping pedophiles running a global child sex-trafficking ring is plotting against President Donald Trump, who is battling them, leading to a ‘day of reckoning’ involving the mass arrest of journalists and politicians.”

The next sentence reads: “No part of the theory is based on fact.”That second sentence makes me slightly uncomfortable. It is not reproduced on the pages for the world’s major sects and religions, for instance, nor can it be found in the Wikipedia entry for the Book of Revelation of the Bible, which shares with QAnon an apocalyptic spirit. Part of my approach, you may have noticed, is to consider that for many adherents, QAnon is more about a set of beliefs than a set of facts.

Popular Post:  Evangelicals at base of Trump hopes for Pennsylvania repeat

One of those beliefs seems to be that child abuse is both widespread and underreported, and the latest statistics appear to support that. But then there are many falsehoods and exaggerations piled on top. At any rate, I wonder how many QAnon adherents are motivated not primarily by opposition to child abuse, but by frustration with elites.

Certainly, the positive portrayal of Trump, and the corresponding negative depiction of many journalists and politicians, seems designed to offend elite coastal opinion. But it’s necessary to dig deeper still. Is outrage at elites really the central issue? There is good evidence that believers in conspiracy theories tend to think society is changing too fast, and that their world is beyond their control.

Maybe the anti-elitism is a convenient marketing device, a way to make the doctrine focal and appropriate for 2020, but not really the driving motivation behind QAnon support. I would like to know how the incomes and social indicators of QAnon adherents compare to those of the rest of the country. A lot of the doctrine is so complex, including figures not famous in America such as George Soros and Angela Merkel, that it seems designed to appeal to people with at least some degree of education. And educated Americans have been doing OK with respect to income and social indicators over the last few decades. Maybe QAnon is a kind of luxury product, one that turns out to have special resonance on the internet in 2020.

There is the related possibility that QAnon’s main appeal is in the sheer complexity of the conspiracy itself, rather than the details. QAnon is often described often as a rabbit hole, offering users an initially simple story that gradually becomes more complicated. Some evidence suggests that conspiracy theories need to offer “uniqueness” to their adherents — that is, the promise of exclusive knowledge. The more complex and detailed the theory, the more likely that uniqueness becomes, and thus the greater the appeal. But just how big a factor is that?

Which leads to the central question, the one that we outsiders are radically uncertain about: What exactly are the doctrines of QAnon that are most appealing and persuasive to its adherents? The temptation is to focus on the facts, many of which are absurd if not reprehensible. And merely disproving QAnon’s claims may not prove very useful, especially if its followers are motivated by a desire to belong to a special and unusual movement.

If the goal is to limit the influence of QAnon, or (if possible) to steer it in a healthier direction, the question of what its followers really believe needs a better answer.

Sat Feb 13 , 2021
Walmart, Amazon, and other corporate giants donated money to the reelection campaign of a Tennessee state lawmaker who had used social media to amplify and promote the QAnon conspiracy theory, according to an Associated Press review of campaign finance records and the candidate’s posts. The corporate support for a QAnon-promoting […]